Independence Day: Supporting the Wayzata Chapter, Children of the American Revolution & Other Events

The annual Flying Pancake Breakfast celebrating Independence and also honoring US military veterans was again held at the historic depot in Wayzata, on the shore of Lake Minnetonka. This is a major event each year for the Wayzata Chapter of the Minnesota Children of the American Revolution and it has grown in popularity over the years. This year over 1,600 people attended. Besides the breakfast there was face painting and living history. The Mayor of Wayzata presented honors to attending veterans of WWII, Korea and Vietnam.
Supporting the C.A.R. project were members of the Lake Minnetonka Chapter of the Daughters of the American Revolution, the 7th Pennsylvania re-enactment group and the Color Guard of the Minnesota Chapter of the Sons of the American Revolution. The D.A.R. ladies wore dress of the era and played the parts of women who actively served in the revolution. The 7th PA, in authentic uniform, provided a tent and a display of equipment common to the army. The S.A.R. provided living history soldiers. All these supporting volunteers interacted with the guests throughout the day, telling their persona stories, explaining aspects of the army life and answering the many questions asked by adults and children. During the 5 hour event the uniformed members of the 7th PA and the SAR performed  displays of the manual of arms and several times marched to the pier and fired volleys with their muskets.
The exposure to interested adults and children of this sampling of life and service in our quest for Independence was warmly and excitedly absorbed. Especially exciting to the hosts and supporting organizations was the interest shown in the living history by children whom many, if not all, went away with a curiosity and interest to learn more about our American Revolution.
Color Guard members participating were Col. Paul (Commander) , color bearers John S-  and John M-, guard Craig and drummer Steve.
For more, visit the CAR facebook page at: https://www.facebook.com/Lake-Minnetonka-CAR-4th-of-July-Flying-Pancake-Breakfast-184175048375318/ 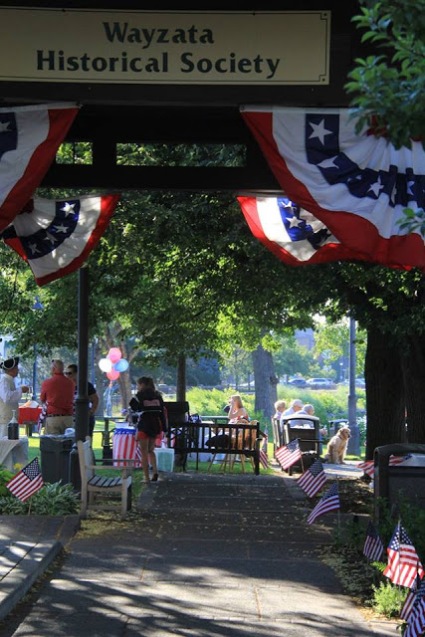 Aitkin, Minnesota
In response to an invitation from the Robert Orr Chapter of the Daughters of the American Revolution, Brainerd, Minnesota, Color Guard member Craig joined the costumed DAR ladies, their costumed husbands and family members for a living history reading of the Declaration of Independence prior to the community fireworks show at the Aitkin County fairgrounds. Photos compliments of Kari Abbott, D.A.R.


Veseli, Minnesota
Color Guard drummer Steve marched and played his drum in the Independence Day parade in Vesili. This is his second year participating in the parade in uniform and playing the drum and his presence has proven popular enough to bring an invitation do so again.