School program in Mound
May 16, 2019 Compatriots Chris  and Craig  were joined by D.A.R. Ladies Teresa  and Gigi for a living history presentation at Grandview Middle School in Mound.
Assisting was student James , C.A.R. Three one hour sessions were held with 30+ 5thgrade students per session. The team introduced themselves and their persona and gave a brief history of their patriot ancestor then launched into a series of short stories, pointing out some facts and fictions about people and the struggle, offering several vignettes and answered plenty of questions coming in from the students. Some subjects covered were flag history (in which students held flags) Molly Pitcher lore, camp followers, how the Cubans helped our victory at Yorktown, the Sybil Ludington story, clothing, pay, child life in the era, death or incapacity due to disease vs battle wounds, militia service, how Mount Vernon got its’ name, the help of the French and Spanish, Franklin’s snake cartoon and “Huzzah” (which the students shouted with enthusiasm). One of the teachers wrote us: “it’s fun to hear crazy stories that you wouldn’t read about in a 5th grade text book,” and “more about what did they eat, how did they sleep, what were the weather conditions, … more random details that the kids wouldn’t have learned about”  and suggested we use more replicas from the period which the students may hold and pass around.
The living history team concluded that there will most likely be more such teaching opportunities arising now and that a combined S.A.R./D.A.R./C.A.R living history team equipped with replica items of the Revolutionary War era will be pursued. The D.A.R. and S.A.R. working together to further education on the Revolution together was a great success. 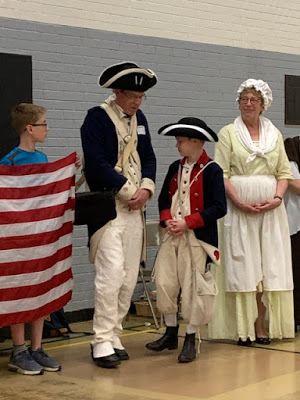 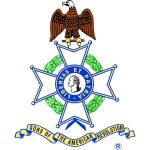