Color Guard Commander, the Honorable Paul K. Theisen was awarded the Patriot Medal by the Minnesota Chapter of the Sons of the American Revolution at the February Washington Day luncheon. This is the highest award the Minnesota Chapter may present to a compatriot and is in recognition of long, faithful and outstanding service to a chapter or to the State chapter. The medal was designed by the late compatriot General of the Army Douglas MacArthur.  Theisen was recognized by the State Chapter for his creation of the Minnesota S.A.R. Color Guard in 2007 and his leadership of the Guard since inception. Under his guidance the Guard has grown in numbers and has made many appearances in the State, fostering greater public interest in our Nation’s Revolutionary War background.
Theisen is also a recipient of the Bronze Color Guard medal, and is a past State Chapter President of the S.A.R. 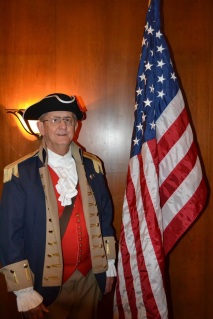